(KNSI) – A tribute to service men and women is being developed in central Minnesota.

Big Lake will be home to close to one of some 100 Liberty Rocks painted by artist Ray “Bubba” Sorensen.

Sorensen started painting the mural on the big rock this week, and it should be finished next week.

“I want to visualize or illustrate for the people, the service and the sacrifice of our veterans. And that’s kind of the point. Tell the story through the illustration.

He says every mural is different, but they all have at least one thing in common.

Big Lake’s Freedom Rock will feature a soldier battling PTSD, a local sailor lost on the USS Cyclops, an eagle with a Purple Heart in its claws, and something to honor women in the military. 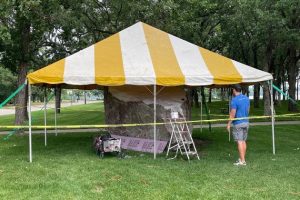 Big Lake will host a Freedom Rock dedication ceremony on September 18 at the Jefferson Square Park-Veterans Memorial west of McDonald’s.

To learn more about the Freedom Rock project, click here.

Copyright 2021 Leighton Enterprises, Inc. All rights reserved. This material may not be broadcast, published, redistributed or rewritten in any way without consent.

The recently discovered work of Vincent van Gogh was first unveiled at the Amsterdam Museum, …